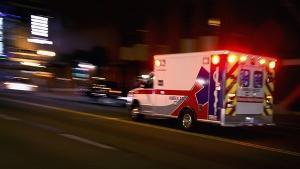 Emergency vehicles like fire trucks, ambulances, and police cruisers exist to protect the public and keep people safe, but they themselves can often be a danger to society. Connecticut law gives emergency vehicles a considerable amount of freedom to violate traffic laws when they are responding to an emergency.

Emergency vehicles have a special law § 14-283 that allows them to disobey most traffic laws provided that they are using their lights and sirens and are responding to an actual emergency. This freedom means that injured victims cannot point to traffic law violations as evidence of negligence the way they normally could. Traffic accidents involving these sorts of vehicles present special issues because it can be more difficult to prove that the driver of the emergency vehicle was operating it negligently.

In many states, municipal governments provide emergency ambulance services which respond when an emergency call is made from a residence or business. However, in Connecticut, many hospitals and private companies operate ambulance services, creating a more complex situation when a traffic accident occurs.

According to Connecticut’s Department of Public Health’s Public Health Code, ambulance services must file an accident report to the Office of Emergency Medical Services (OEMS) when “any accident which has been deemed by the law enforcement agency or primary jurisdiction to be the fault of the service or which has resulted in personal injury, or property damage estimated to be in excess of six hundred dollars ($600.00), or both.” In other words, if the officers responding to an accident where an emergency service is involved believe they are at fault, the first responders involved in the accident must make it known to OEMS that an accident occurred while they were on duty.

Showing that a driver who caused an accident was driving negligently is a key element of most traffic accident lawsuits. Negligence is a legal term with a specific meaning, but in a general sense, it means the driver was driving carelessly. One of the easiest ways to show this lack of care is through the violation of traffic laws. If an ordinary driver is speeding or running through red lights, then these violations can be used to show negligence. This does not work for emergency vehicles.

If you have been injured in an accident with an emergency vehicle or some other type of vehicle, you do not have to suffer in silence. Contact a Connecticut personal injury attorney today for more information about your options.